George Anastaplo teaches constitutional law and jurisprudence at Loyola University of Chicago and is also a lecturer in liberal arts at the University of Chicago. In 1950, he was denied admission to the Illinois bar because of his principled refusal to answer questions about his political associations. He took his case to the Supreme Court and lost in 1961. Justice Hugo L. Black, in his celebrated dissenting opinion, wrote, “We must not be afraid to be free.”

This has been the theme of Anastaplo’s career, which he has devoted to education and public service. He is the author of Human Being and Citizen: Essays on Virtue, Freedom, and the Common Good, The Artist as Thinker: From Shakespeare to Joyce, The Constitutionalist: Notes on the First Amendment, and The Constitution of 1787: A Commentary. In 1992 he was honored by the publication of a two–volume work, Law and Philosophy: Essays in Honor of George Anastaplo. Anastaplo has been nominated annually since 1980 for the Nobel Peace Prize. Andrew Patner has said of him that he “remains the most challenging American essayist.” 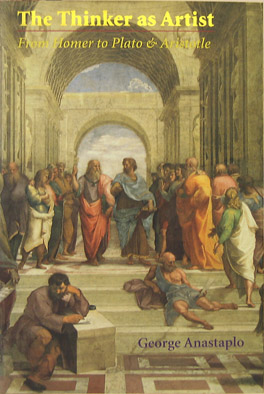 Drawing upon a series of classical authors ranging from Homer and Sappho to Plato and Aristotle, George Anastaplo examines issues relating to chance, art, nature, and divinity present in the artful works of philosophers and other thinkers.