Jeffrey N. Cox is an associate professor of English at Texas A&M University, where he serves on the Steering Committee of the Interdisciplinary Group for Historical Literary Study. His work on the drama of the romantic period includes In the Shadows of Romance: Romantic Tragic Drama in Germany, England, and France; he is currently working on the literary circle around Hunt, Shelley, and Keats.

In the Shadows of Romance
Romantic Tragic Drama in Germany, England, and France
By Jeffrey N. Cox

In the Shadows of Romance examines the role of the tragedy in Germany, England and France during the romantic literary period. Cox responds to the prevailing dismissive view of the romantic tragic drama, effectively arguing for its place as expressions of the whole romantic movement and as a vital chapter in the history of Western literature. 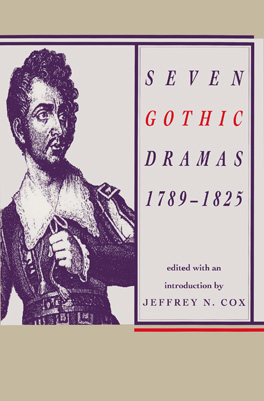 The Gothic drama came at a critical moment in the history of the theater, of British culture, and of European politics in the shadow of France’s revolution and the fall of Napoleon. It offered playwrights a medium to express the prevailing ideological tensions of romanticism and revolution, and also responded to a growing and changing theater audience.In