Joshua Mehigan was born in upstate New York in 1969. Since 1993 he has lived in New York City and worked as an editor and English teacher. Published in many journals, including the Chattahoochee Review, Dogwood, The Formalist, Pequod, Ploughshares, Poetry, The Sewanee Review, and Verse, his poems and translations are also forthcoming in anthologies from Word Press and Zoo Press. His poems have won the Dogwood Poetry Contest and been nominated for a Pushcart Prize. 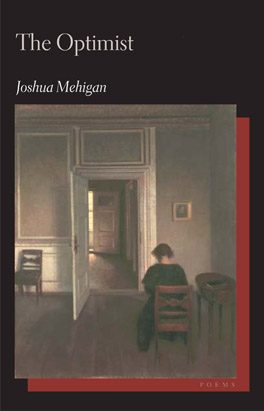 The Optimist
Poems
By Joshua Mehigan

In Joshua Mehigan’s award-winning poetry, one encounters a lucid, resolute vision driven by an amazing facility with the metrical line. Most of the poems in The Optimist unapologetically employ traditional poetic technique, and, in each of these, Mehigan stretches the fabric of living language over a framework of regular meter to produce a compelling sonic counterpoint.The