“Reading the three novels in a line, from The Wife of Martin Guerre to The Ghost of Monsieur Scarron, is a powerful experience…. In each there is a fully and vividly realized woman who finds herself twisting helplessly in the dilemmas posed by love and duty.”

This is the first digital version of Cases of Circumstantial Evidence, a collection of three historical novels by noted American writer Janet Lewis. For the first time, these works have been brought together in a single edition, each with a new introduction by Kevin Haworth:

The Trial of Sören Qvist
Although set in seventeenth-century Denmark, The Trial of Sören Qvist has a contemporary feel and has been praised for its intriguing plot and for Lewis’s powerful writing. In this second novel in the Cases of Circumstantial Evidence, Lewis recounts the story of a murder, an investigation, and a pious town pastor who confesses to the crime, driven perhaps more by a recognition of his own moral flaws than by guilt for the acts of which he stood accused.

The Ghost of Monsieur Scarron
The court of Louis XIV and a modest Paris street provide the incongruous settings for this tale of a humble bookbinder, his wife, and the young craftsman who seduces her and blackmails her husband into covering up a terrible crime. This third and last case of circumstantial evidence bristles with character, the smell of blood, and considerable suspense against a backdrop of national political unrest in the cruel and dingy Paris of the seventeenth century.

Janet Lewis was a novelist, poet, and short-story writer whose literary career spanned almost the entire twentieth century. The New York Times has praised her novels as “some of the 20th century’s most vividly imagined and finely wrought literature.” Born and educated in Chicago, she lived in California for most of her adult life and taught at both Stanford University and the University of California at Berkeley. Her works include The Wife of Martin Guerre (1941), The Trial of Sören Qvist (1947), The Ghost of Monsieur Scarron (1959), Good-Bye, Son and Other Stories (1946), and Poems Old and New (1982).   More info → 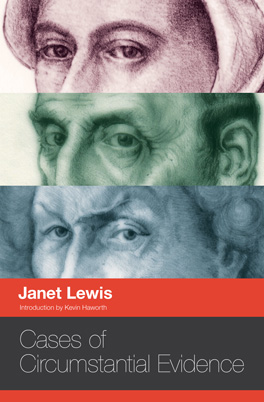 Sign up to be notified when new Women Authors titles come out.